The Stone Balloon has been around since 1972.
Learn more about our past, present, and future!

Our History Our Chef

The Stone Balloon Tavern and Concert Hall opened its doors in 1972 and rapidly became, as Playboy magazine once noted, “One of the 100 Top College Bars in America”. Delaware’s premier live music venue, “The Balloon” hosted such iconic American bands as Bruce Springsteen and the E Street Band, The Allman Brothers, The Dave Matthews Band, and Metallica, as well as local favorite George Thorogood and the Delaware Destroyers.

Fast Forward 42 years to the NEW Stone Balloon Ale House. Built on the sight of the iconic rock hall, the Stone Balloon Ale House features a unique blend of crafted food, exceptional beer, classic cocktails redefined, and an array of spirits –all flavored with a dash of nostalgia. Our culinary mantra is “Comfort Food Playfully Reimagined” and we prepare seasonal favorites that strive to please the palette and resurface a memory. Through local partnerships and genuine hospitality we offer an experience that honors both community and time.

Stop by to see us on Throwback Thursdays, an homage to the old legendary Stone Balloon MUG NIGHTS. We may be new, but we haven’t forgotten our roots! 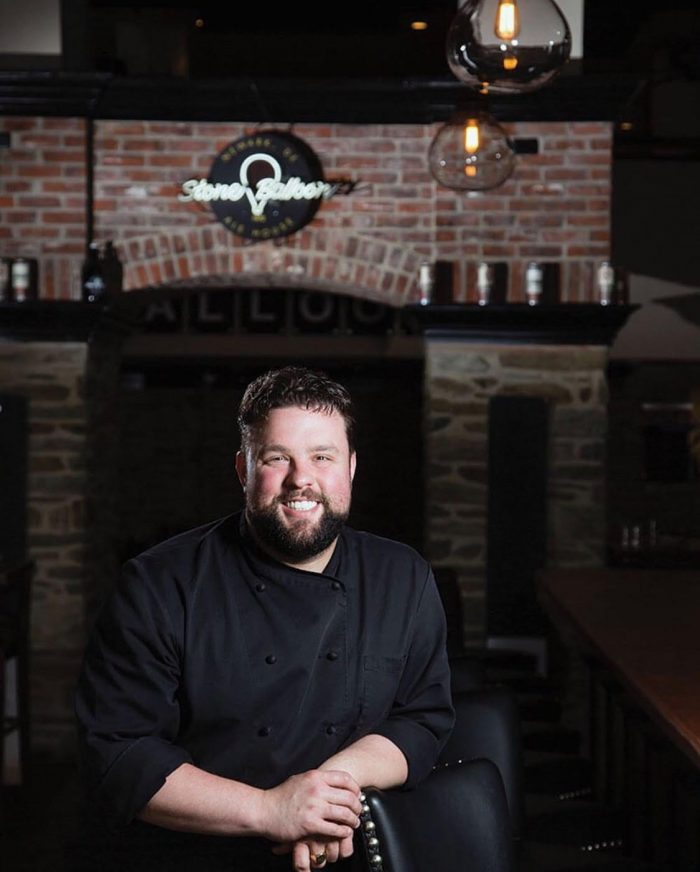 Cooking is in Chef Robbie Jester’s blood – he began his career in his family’s restaurant at the age of 12. After finishing high school, he continued on to the Culinary Institute of America where he graduated with high honors. He then returned to his family restaurant as Chef de Cuisine while also holding posts at the DuPont Country Club and Hotel du Pont. Chef Robbie arrived at Toscana Kitchen and Bar (Dan Butler’s flagship restaurant) in 2008 as sous chef but quickly rose to Executive Chef. During his tenure with Toscana, he oversaw the renovation of Toscana Kitchen and Bar to Piccolina Toscana and became chef of Toscana To Go and Toscana Catering.

Searching for new challenges, Chef left Toscana for a General Manager position at 16 Mile Taphouse in 2013. When High 5 Hospitality purchased the space in August of 2014, Chef stayed on and has worked tirelessly to reinvent the restaurant as Stone Balloon Ale House by preparing favorites from his childhood and “comfort food playfully re-imagined”.

Jester’s talents have not gone unnoticed; he was one of a handful of chefs chosen for Maryland Governor O’Malley’s 2009, 2010 and 2011 Buy Local Challenges, and for Chefs by the Bay in 2010 and 2011. Jester has also been featured in Delaware Today Magazine, Brandywine Signature Magazine, Out and About, and the News Journal as well as being voted one of the “Best Chefs of America” for the state of Delaware from 2012 thru 2014. Chef Jester has also catered events for Vice President Biden and the King and Queen of Sweden.

In November 2015 Chef Robbie was featured on Food Network show Guy’s Grocery Games where he both won and lost.  In 2016, he earned some serious bragging rights when he won against Bobby Flay on Beat Bobby Flay with his award winning Shrimp Scampi.

Chef Robbie continues to add to his list of accolades and of most recent was voted Best Chef Delaware (upstate) for his 3rd year in a row.  He earned this award in 2017, 2018, and 2019.

Currently, in addition to Chef Robbie’s role at Stone Balloon, he also serves as the Culinary Director for High 5 Hospitality.  Most recently assisting with the initial concept and opening of Limestone BBQ and Bourbon and the opening of Eggspectation.  We are fortunate to have Chef Robbie overseeing the culinary vision of our brands and look forward to more great things from him.